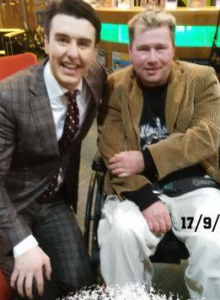 For me, the saddest part of this whole episode was that he was ‘exposed’ in the papers on the same day that a prominent RTE employee, was caught in a sting operation, after going to Leeds to meet the 13 year old girl that he had groomed.

Al Porter on the other hand, allegedly groped a few adult men and perhaps made them feel uncomfortable.

For me these are not career ruining actions!

The guy is a successful 24 year old. Perhaps all the success and nascent power he now enjoys, went to the wrong head?

The punishment has to fit the crime and certainly, but he’s far superior to the company he’s keeping at the moment. Being as they are male, straight and complacently powerful.

Compared to them, he’s almost repressed!

People’s careers cannot be ruined forever, because of misdemeanors they did in the past. Some statute of limitation has to apply. He is a susceptible 24 year old, not an aged predator and I hope this is always remembered.

At most this was an abuse of position, but the groping of guys by an effeminate gay comedian cannot even remotely be viewed, on the same level as the raping executives of the straight world.

A fear of sexuality, a dollop of homophobia and a current justified anger at men who can’t keep their hands to themselves, should not a promising career break

Links used for this blog