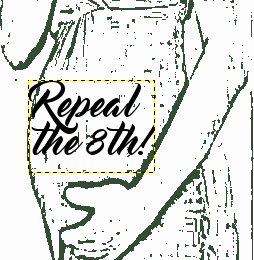 (Update Friday 9/03/18) Even though the following blog was done some time ago, a lot of my core ideas have not changed The tired old “pro-life” bandwagon will no doubt keep rolling out the same stifling rhetoric again. This is my little effort to counter that.)

In the last few days coming up to the elections on Friday (general election in February 2016), I am still very frustrated that there is still so much abstract speech, about the abortion issue in Ireland.

Last week, I saw a 43 year old woman (on a tv election debate) saying this issue was first brought up during her inter/junior cert year.  After all these decades, it still has not been addressed fully.

Its almost as if they conveniently forget, that a normal gestational period, is only nine months! Time is certainly not on the expectant mothers side. at that early stage and the rest of their lives should not be forcibly derailed by the opinions of others.

The really annoying thing, is that if she does go ahead with the pregnancy, the very same people who will castigate her for even considering an abortion, will now look down on the single unmarried mother with impaired prospects and a financial drain on the system.

How easily their seemingly sanctified words are abandoned, when an unplanned scenario presents itself!

What I object to most, is the Maud Flanders like people, trying to steer the conversation to (for me) quite a dark place.

Yesterday, I heard a woman spouting out her statistics, about 693 babies with Down Syndrome, being aborted in Britain last year.

From my own experience, I would almost consider it criminal to give birth to a child with such disabilities, which would make Down Syndrome look almost healthy by comparison.

Life is tough enough without having to fight your own body every day and exist through the kindness of family, or the paid commitment of strangers.

I am someone with multiple disabilities myself and I am very tired of the conversation being abused in this way.  I consider it, nothing more than a sensationalist attempt at muddying the minds of undecided voters.

Heartstrings are tugged and the conversation is manipulated. What can pro choice people say in these situations, without sounding absolutely heartless?

Am I letting down people with disabilities? I think not!

We cannot abort our way to a disability free world, but the existence that occurs after exiting the womb, is far more important than what happens inside it.

For me its a fundamental issue, that speaks volumes about a persons mentality. If they are anti choice, they are almost certainly ideologically brainwashed.

I remember someone saying to me, with their head held high and cheeks  proudly puffed, how “pro-life” they were. I asked her for €50, as I was going out. She was “pro-life” right and I am living. I think you know how it ended! Her pious words were empty and meaningless.

We are still exporting the problems brought by unwanted pregnancies, forcing thousands of Irish women every year, to go abroad to the UK.

I certainly feel that after decades of hurtful language, gloomy prophecies and other worldly intercessions, that the time is now for defined and categorical constitutional change!

“You’ve made your bed, so lie in it!” This is the harsh dictate that underlines the “pro life” arguement. This is a throw back to a much more savage time, where a false ideal was imposed on more than half the population and knitting needles were used for far more than creating pretty jumpers.

I do wish that instead of harassing the women right up to the doors of an abortion clinic in another country, that they would devote a fraction of their energy and attention, to the upbringing of the children rather than nosily moving on to the next sinner.

Hopefully more attention will be given to the actual living, rather than the potential living.

Its a scenario that most of us will never remotely be faced with. But its always worth disentangling ugly religious tentacles from the often unbearable realities, of what we lowly living humans have to endure.

(Update Sunday 29-04-18: I happened to be up in the city centre yesterday. We parked outside the Rotunda Hospital and I was appalled to see posters with a picture with an aborted foetus, in very close proximity to one of the countries largest maternity hospitals. This was for the vote no side of course. 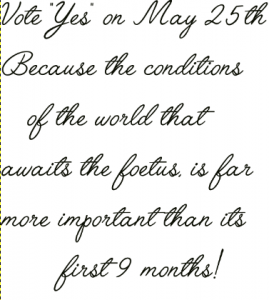 of course. I hope the vote yes side will rise above these tactics. They could easily put up pictures of deformed children, kids on life support, kids being sexually abused or emaciated child prostitutes, which very well could be the reality of the lives they are born into, once they leave the safe confines of the womb.

(Update Monday 19-03-18: I think my computer was hacked and this blog was deliberately hidden. This whole debate is too important for this to happen, so as many times that they take it down, I’ll put it right back up!)

Links used for this blog: Abortion Statistics in Ireland: https://www.ifpa.ie/Hot-Topics/Abortion/Statistics

0 0 0 0 0 0
No comments Anti choice misuse of disability-Repeal the Eighth!