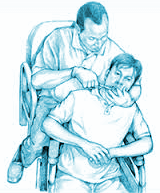 Yesterday, I had the unusually painful experience of having to bite my tongue, while listening to the story of how two people (who are currently sharing the same respite facility as myself) were asked to leave the living room of a local hotel.

There was a rugby match on the telly, and I can only assume that the site of these two severely disabled people was more than a little off putting, food and drink wise.

While everyone else in the centre screamed discrimination, I stood out like a sore thumb, by not rallying to that particular battle cry.

I remember a few years ago going to the cinema in Liffey Valley. A number of people with intellectual disabilities were brought in to a film they obviously had no say or interest in seeing.

As far as I could tell, it was just a way to fill in the hours by the paid assistants, who probably also availed of the time to improve their English vocabulary.

I remember feeling very embarrassed and sorry for the other patrons. They had to enjoy constant roars and loud admonitions, that would make an otherwise noisy cinema venue feel like a library.

My overriding feeling was that their right to see a film, did not override everyone else’s right to see the same in a bit of peace of quiet.

I certainly wasn’t angry with the people with intellectual disabilities, but rather their indifferent handlers.

My one guiding creed, is that you are treated the way you allow yourself to be treated. I am not sure how I would of reacted myself. I probably would of been stunned into a shamed inspired silence.

From what I’ve heard, the main problem was that this situation was not handled very diplomaticly.

Could that humiliating blow really not have been cushioned, even just a small bit? Could another place not have been suggested and a complimentary drinks proffered as a deal sweetener?

Those people who are not intellectually disabled, just trapped in decrepit bodies, with their two coloured assistants were traumatised and their evening outing ruined.

“Oh, but they were so quiet, minding their own business. They were just rudely asked to segregate themselves.”

I don’t like to see vulnerable people being bullied, but why was my sympathy not more forthcoming?

I had to sit someone down, to try and rationalise where my view point was coming from.

As someone with a progressive illness, maybe I feel that they were holding up a gruesome mirror to the present/future. Embodying the ugliness of where I am now, with the knowing fear of what’s just around the corner.

I’m quiet sure that if I get to a stage where I can’t eat without too much assistance, or am unable control some key body functions, then I would certainly not be eating or drinking out in public.

“What if the “normal” woman in the corner was an overweight crone and the other patrons couldn’t keep their food down” I was asked later on, by another staff member.

Well there are lots of those around of course, but its a totally different ball game, if the person couldn’t control their body functions, or their noise making.

Take disability out of the picture altogether. What if there were customers who had drunk too much, were picking their nose, loud, obnoxious…. (you get the picture).

I think it is within the right of management, always to ask someone to leave. How it is handled is key. The line is not that fine, between diplomacy and disaster.

I remember being 12 and going to my first FA annual social.

I was fairly newly diagnosed The haunting shock of seeing all these people with their twisted limbs, slurred speech, curved hands and chaperoned lives.

How far away I would like to be away from that picture. How horribly fast that picture is coming to life.

Maybe that layered form of self loathing, has become so internalised and deep rooted, that even after all this time and physical decay, I am still repulsed by them and overlooking the me in that descriptive.