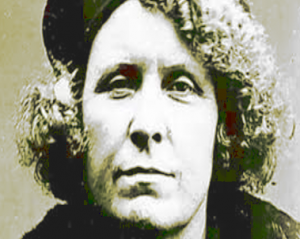 Going through, my groaning bookshelves, full of unread books last night, I came across a book about a backstreet abortionist called Mamie Cadden.

To my surprise, this was a very Irish story, of what life was like for pregnant women in Ireland, in the early days of the Free State and before the Catholic Church got such a redoubtable stranglehold on the direction of the country.

A murky period of Irish history, where under the financial austerity of Eamonn De Valera and the tighter religious confines of a culture edited by Archbishop John Charles McQuaid and his cohorts, a thriving abortion industry flourished.

Always heavily persecuted by the Gardaí, (even though their wives were among her top “customers”) for her miscarriage inducing services.

There seemed to be a lot of women in the founding decades of the Republic, who were desperate enough to pay the £50 (equivalent of €3000 now) for the termination.

Between 1942-46 there were 25 cases of induced abortions, before the courts. This absolutely shocked me. I can only presume that such a scenario has and always will happen.

In 1929, Judge Kenny (quoted in the Cork Examiner) indicated that only 1 in 50 infanticide cases made it to the courts.

Who knew that in 1940’s Ireland, just around the corner from her offices in Upper Pembroke Street, there were a number of abortion practitioners, like Mr William Coleman who had no medical qualifications whatsoever (apart from being an electrician).

What about all the women, who couldn’t get to Dublin though?

Any vestige of gender equality inherited from the British legal system, or any woman centred medical approach, were soon to be obliterated by the dominance by religious order run maternity hospitals.

I certainly did not know, that the demise of the role of the Irish Midwifery profession was directly related to the amount of Midwives that must have colluded in abortion.

In such a supposedly strict and very sexually repressed age, where there was no such thing as contraception (a scenario that would last for decades) infanticide and child abandonment were commonplace.

Mamie Cadden as an individual did not appeal to me at all. I found her quite ruthless, and money driven for sure!

My sympathy for her evaporated, as she kept returning to her profitable profession, as soon as she was released from her stays in Mountjoy. I never got any feeling that her services were carried out by any form of gender empathy.

It was her chosen profession, to line her own pockets and fuel one of the first sports car driven around Dublin (by herself) in the early part of the 20th Century.

We all know what came after the time of Mamie Cadden. The religious order run hospitals and the forced adoptions and rampant institutionalisation of those sin drenched Jezebels.

We have a cottage industry now, of books testifying to the horrors, that came after the child was born.

Maybe many lives would have been a little easier, if more focus had have been given to their circumstances post womb!

Is it not a rather chilling notion that the first unseen nine months, be considered by some, to be more important than the life conditions that will follow?

We too often like to delude ourselves about the past and our societies stellar reflection in it!

Okay, the people involved are no longer getting many years of penal servitude (with hard labour) in Mountjoy jail, but that’s only because we have long exported the problem!

I think we all know, what a dangerous combination, utter desperation and a pressing time limit can make.

I would never have thought that it was such an Irish story and unfortunately very little has changed.

Wouldn’t it be wonderful if every child was born into a loving and cared for environment. Unfortunately bad things often happen to good people.

Having a legal and safe abortion provision, does not create the scenarios that lead to unwanted pregnancies, it merely responds to it.

Reading this book, it struck me of how little this country has changed. How obnoxious is the imaginary bubble that we have created, deluding ourselves that somehow the legal presence of abortion would some how create an exponential rise in the number of cases who resort to it.

I don’t feel, its ever a decision casually taken by any woman!

You certainly cannot abort your way into a better world, but I do think that the rigours of life and living, would be made so much worse, for those forced to be born into environments of poverty, emotional or physical neglect…

Worse still to be born as a living reminder, of all that went wrong with your conception.

Its a very difficult scenario and one that I fortunately will never even remotely face, but I will never stop calling out, these hymn singing guilt pushers, who so conveniently doctor the past.

Surely it is better to have legal abortions, as opposed to backstreet ones?