Misunderstanding F.A (easy to do when you don’t have it) 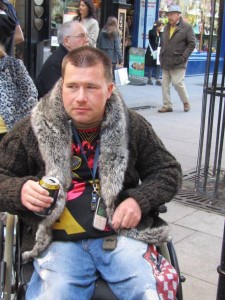 I had been recommended to see a clinical neuro-psychologist. After the appointment came through and with a lot of time and effort on my part, I made it up there for 9.15  am.

However by the time we got an illegal parking space (as usual all wheelchair spaces were taken) it was 9.40 am, by the  time we isolated where his office was.

And so I offered ,myself up like a bemused dog, going to a strange vet. He meekly came in, with all of his coordinated and confident normalities.

Affable, but so weak voiced that I had to ask him to close the window. This was going to be  transformative, or at the very least, good fodder for a blog!

Thankfully I have never been the sort of person to keep things in. As isolating as this condition goes, I have always been unable to hide successfully any issue that is niggling away under the skin.

Throughout my attempted life, problems that could potentially fester, were always shared and advice from others was always sought, to see how they got over it. Sharing is caring after all!

This was unusually lucky on my part. Friedreich’s Ataxia  by its very nasty nature, is an introvert’ paradise. This invisible assailant, whom no-one has ever heard of, let alone define!

For a long time now, I have had grave misgivings about the idea that you go into a potentially therapeutic meeting (or session of them) and you come out mentally cured, or failing that less mentally weighed down.

Perhaps I was just too suspicious. Years of watching obliquely edited daytime tv, with all complications being nicely addressed and resolved within the hour, had perhaps dulled my thinking!

One issue that I tried to explain to him ( I do not know how succinctly) was the added pressure of having a progressive illness.

I really do feel that it would be easier to cope with a swift change, whereby you go from being fully able to a lesser state that is fixed. Then you can gather your head and learn how to deal with the situation as best you can.

It really is head wrecking to be constantly going down hill. You adjust to one state and then something else goes: you lose the ability to clearly write, your speech becomes more slurred , your pelvis locks, your core disintegrates into a baby like mess….

I did most of the talking during our session , one of his professional technique’ was to tell me to practice mindfulness. To close my eyes and just concentrate on being in the present moment and once there to thank myself for allowing myself to be there.

My recently heavy eyes rolled unconsciously, and began to envy the closed door. There was an obvious gulf between us!

One of his suggestions, was to try to mentor other people with this condition.”We all have to make an effort, just like I am here for you today”.

When I reminded him that he was being paid for this and that on my part, there had been nothing but time and effort to get up there, sacrificing my precious P.A. time. This seemed to be a stumbling and silencing news flash for him.

Of course, I don’t want to talk about disability and the glorious effects of bodily disintegration. Its an ever present ominous cloud, from which I will gladly latch onto any distraction.

How could he throw out his dry words so casually? Or maybe the question to ask is, why were those same words not having much of an impact on me and my circumstances? Perhaps they were   the learned words from a supposedly erudite man, but my realities rendered them hurtfully obtuse.

Those words might have had more of a soothing effect, if they could have untwisted curled fingers, breathed new life into decaying muscles, or even uttered sweet nothings.

I said that I remembered when I was 11 and newly diagnosed going into Naas and being told by a doctor with a dumbly broad smile on his face that he knew people with FA who were 65.

Even as a young 11 year old I could not match his pretended optimism . What is so good about living to that age, in a hated body? I knew even then that quality trumps quantity every time.

Time is very much a double edged sword. Too much of it, can be every bit as sharp and cutting as its opposite.

With the clock relentlessly ticking, and my PA outside, I had only the briefest of opportunities, to convey to him how much of a time and body prisoner that I am. I can’t even end this sentence with becoming, because for me a lot of the fears that I always had growing up are now decidedly in my present.

I wanted to let him know that the disability industry, is as coldly business like as any other. Horror stories surged in my reluctant memories, tired of continued suppression.

Perhaps I would have been more receptive to his words if he had started off the meeting with a humble disclaimer like “I ultimately can’t help you, but just treat this session as a safety valve or as pressure release”.

Fortunately for him the session was up and he had to race off to the next time & body prisoner. I was left me with no great desire to repeat this experience again, or recommend it to another.

Foolish me for even considering that he could have lifted my spirits, or directed me better with his paid empathy.