My bad experience with Twinkledeals.com 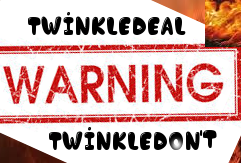 (Update Monday 22/08/16: On Saturday morning, I got an email from PayPal saying that my money was going to be refunded. Two of the t-shirts I had ordered, had arrived and as expected one of them was certainly not the large size, I had ordered.

I suppose this is what happens, when the site that you think is British, but is actually American, sends out goods with Chinese labels attached, from the Czech Republic!

I thought it was a good sign though, that they agreed to refund the order in full, without having the nerve to ask me to spend more money sending them back somewhere, at my further expense!)

(Update Sunday 14/8/16: It seems the site is American alright. There are  so many negative reviews and even a Facebook site decrying them. Too late for me maybe? I’m still going to contact PayPal, why are they associated with such sites?)

I can’t believe I’ve been sucked in by this website. It probably just goes to show that a catchy website  newly restored paypal account, do not make the best combination.

They have not even had the courtesy to reply, to three separate emails from myself. A first warning flag is that three days later my credit card was debited by paypal under the name “HASSAN”.

I must have accidentally friended them on FaceBook. I really don’t like that after your order is placed, they almost take over your browser, with repeated ads for themselves.

One of my big problems with this site, was the confusing use of three currencies active on the web page ($,£ & €).

Although I believe they are a British site (they have a Coventry address, no one is getting back to me to verify).

So with all the currency conversions two tshirts and a pair of “jogger” pants in a 50% sale nearly cost me €39.52.

Even their confirmation email was incorrect, showing only two items, instead of three that I had originally ordered.

The sign of a good company is how they deal, when problems arise. Things are always great, when they are heavily on the sale.

Why is your credit card debited almost instantly, even though you still haven’t received your products after two weeks?

I naively thought online shopping was fairly safe these days!

Thankfully I used paypal and was not stupid enough to give them my credit card details.

If anyone else has had issues with this site, please contact me.

It looks like I will have to begin the process with paypal now, in order to get my money back.

Facebook site calling for Twinkledeals to be shut down: