Pope Francis – The leader of the gang is coming! 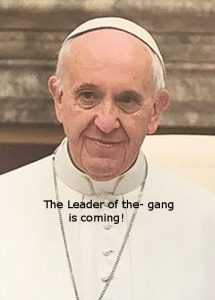 I found myself in the very unusual position of defending the visit of Pope Francis next Sunday in Ireland at the market in Inchicore.

It was not going to be open next week, due to widespread road closures, that are going to be in operation around Dublin from next Friday

“What about the homeless, who will have to sleep in Garda Barracks” (as every available hotel room has eagerly been snapped up in anticipation of this long awaited and coveted papal visit) one stall holder intoned with questionable sincerity.

“Why should the tax payer be spending millions on this visit”?

Well maybe because he is a head of state (like it or not) and the same financial extravagance will be shown to President Trump, if he arrives in the future

The fact also is, that this man holds a position of great esteem and significance for so many tax paying Irish citizens.

It certainly will be interesting to see the reaction. I am totally in favour of peaceful protest. This man’s sect has done untold damage in this country and throughout the world.

I love the film “Three Billboards outside Ebbing Missouri. Yes he himself did nothing wrong and many other priests and nuns led exemplary lives.

However, they were all part of the same gang!

Their silence and mistaken loyalty, upheld the gang and allowed heinous crimes to be perpetrated for decades (if not since his churches creation).

Absolute power corrupts absolutely and now the leader of the gang is coming.

At this stage, contrite apologies are pretty meaningless .

But we did not insist on (or expect) apologies from Queen Elizabeth when she was here, for all the pillage and ignominy done in her families name.

I will not be at any of his venues, but I hope they go off well.

Update on Wednesday 22/8/18: Has there not got to be some statute of limitations? How many times can apologies be offered? Well, I understand that talk is cheap. The coffers of the church, and especially the religious orders should have been emptied long ago.