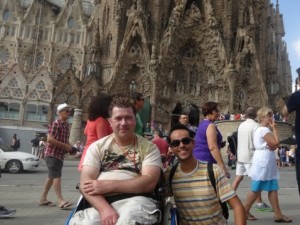 I was turning 40. I know its a milestone that is not nearly as significant as it once was, but for me it would definitely be a day of melancholic reflection or self critical introspection.

I had been seeing for month’s on Facebook, people that I went to secondary school with, coming home from various parts of the globe, heads held high with achievements. How differently our lives had turned out!

I know that comparing your own life path to someone else’, is a fast track to mental obliteration.  I knew that I would be submerged in those thoughts for at least that day. It was a train wreck fast approaching and which had to be avoided at all costs.

And so, with the help of family and friends, I hired an assistant and made my way to Barcelona. I had only stumbled across their website a month or two before the big day.

One of the fun spoiling things about travelling in a wheelchair, especially when you have extra requirements, is that everything has to be planned with near military precision.

My travel agent initially quoted me €270 for three trips in accessible vehicles. €90 each way was just ridiculous.I  feared my whole budget was going to be swallowed up by transport costs.

Albert in Rainbow Barcelona, told me it is part of their philosophy that accessible travel should not automatically equate to expensive travel.

They ended up saving me a small fortune. I did three tours with them. The hot air balloon tour, the Magic Fountain tour and a guided city centre tour of Barcelona, all with a refreshing and eye opening LGBT slant.

Rainbow Barcelona was established in July 2013, offering visitors an opportunity to see Gay Barcelona in all its hard fought for splendour. Currently they have over 5,000 people on their social network lists and operate tours in London, Berlin, Barcelona and Madrid.

Tours aimed at the lesbian market, are going to be focused on later this year. It was great to see the Park in Barcelona with its statue of Sonia, a Transsexual who was murdered by skinheads, and whose brutal death helped usher in a more inclusive society.

Organising the few days, all of my emails were very promptly responded to, which is the sign of a good company. All the tours are prepaid, but great value for money is given in return. Its a young company with hopefully a very long future ahead of them.