Will the next Islamic killings be here in Ireland? 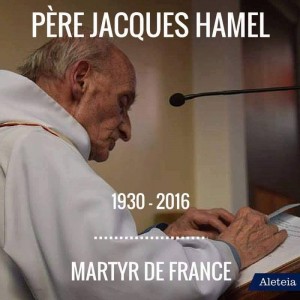 Like so many others I have been really appalled at the state of killings in France.

What threat could an 84 year old priest have caused, to the brain washed blood thirsty Islamists or their stoic beliefs?

To slit his throat on the altar was a detestable act of primeval zealots with fantastical delusions.

I was glad to read that in the wake of the Nice attacks, the French authorities raided over 200 hundred mosques and found a lot of ammunition and fundamentalists propaganda.

This was something that the Americans never did following the attacks of 9/11!

There can never be impenetrable trust given to any “religion”. No belief system (which operates through fear) should be considered untouchable.

I think that the spate of killings which is happening now, is unfortunately the direct result of not seeing the bigger picture. Of being so afraid of this well financed sect and its outlandish and blood prized core beliefs.

I feel sorry for those of middle east origin, who although they have long abandoned their original indoctrinations will inevitable viewed in a hostile light because of the way they look.

I heard yesterday on the local radio, the presenter describing Islam as “a religion of peace”. This often regurgitated nonsense, often makes me want to choke.

Will such a scenario ever happen in Ireland, or can the title of this blog be dismissed as mere scaremongering?

I was just looking back on my blog recently. I came upon one that I put online, just after the Charlie Hebdo slaughter last year in Paris.

I had written that I was surprised that no Irish paper had the guts to reprint those cartoons, and that Dr Ali Selim of the Irish Islamic Cultural Centre had threatened legal repercussions if anyone did so.

I know Ireland is not any sort of political heavy weight, but we do have a growing Muslim population, with the resulting disconnect that arises in other western countries.

That of living in a western world which they have grown up to believe is morally bankrupt and later raising families in them, which leads to a great dichotomy in beliefs.

I truly hope that as a country, we never allow  Muslim schools. To have sanctioned primitive beliefs, is the slippiest of slopes from which we may pay dearly for.

Inflammatory dialogues with invisible attention hungry narcissists, should never be dumbly respected by our state.

Don’t blame Facebook posts ,or any other kind of unbiased outlet, which immediately become mislabelled by those for whom one sided monologues, have long been the accepted norm.

The absolute greatest danger lies in saying nothing!